Everyone who makes outfits has a specific style. Just like everyone has their own style of handwriting and each author has a specific voice in their writing, so too do LOTRO outfitters. Mine has always been a more realistic and RP oriented style. I use a lot of earth tones. You will never see me rocking a purple outfit, except maybe with one of my elves’ party outfits. Another LOTRO outfitter who has a pretty similar style to mine is Devonna over at LOTRO Stylist.

I’ve posted about it before, and I’m feeling it again: I’m in an outfit rut. I still feel like I tend to use the same cosmetic and armour pieces again and again, the same two or three colors over and over. So this time I decided to take a look at some fellow outfit bloggers who have a different style from my own. Two bloggers with a more adventurous use of color and armor pieces than me are Hymne at Cosmetic LOTRO and The Starry Mantle. The Starry Mantle especially uses a really wide variety of armour pieces and isn’t afraid to try out head pieces I don’t even bother to keep. Hymne uses a lot of fantastic color combinations in her work that makes her outfits very dynamic.

I decided I’d start by trying to find a new outfit for Sagewood. I had posted a new outfit for her a few weeks ago but I still wasn’t that pleased with it. Sure I used some new pieces but they just weren’t clicking. I figured a scout/hunter outfit shouldn’t be too hard to find amongst the outfit blogosphere. Eventually what caught my eye was The Starry Mantle’s Outlaw Wolf-keeper outfit. It’s still within my range of comfortable earth-tones and realism, yet it uses pieces I’ve never used (some of which because I don’t own them!). Not wanting to copy it straight off, I decided I’d get some of the pieces together and tweak it a bit. I ended up using some of the ideas from Hymne’s Beta Sneak Peek outfit as well(the third outfit in that post, specifically). Here’s what I ended up with: 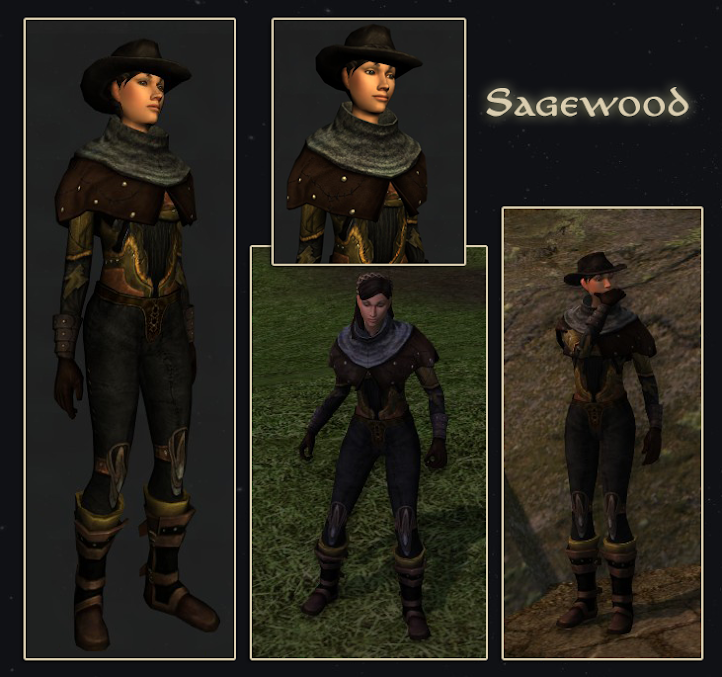 So far I quite like it. The only thing I’m not 100% with is the shoulders. I am very picky about shoulder guards and I don’t like many of the shoulder pieces in game. I’d love if anyone has some suggestions on what they think might look good though! I tried the shoulder guards the Starry Mantle used in her post, but without the Hunter’s helm from that outfit, it just doesn’t work as well I don’t think.

I tried soloing Northcotton Farms on Cithryth today (so she was 20 levels over). I got past the first boss then got bored. It was just taking too long and my patience has a tendency of waning quite quickly anymore. Gone are the times I would gladly sit through an on-level 6-man like Lost Temple, taking the time to learn every battle and the nuances. I just get bored with it too quickly. My attention drifts and I end up alt-tabbing to the internet. So I probably won’t be earning the last 45 Medallions of the Northmen that I need for that Hunter helm. Oh well. Still lots of other armor pieces available in the game.

Kickstart This: Shape of the World