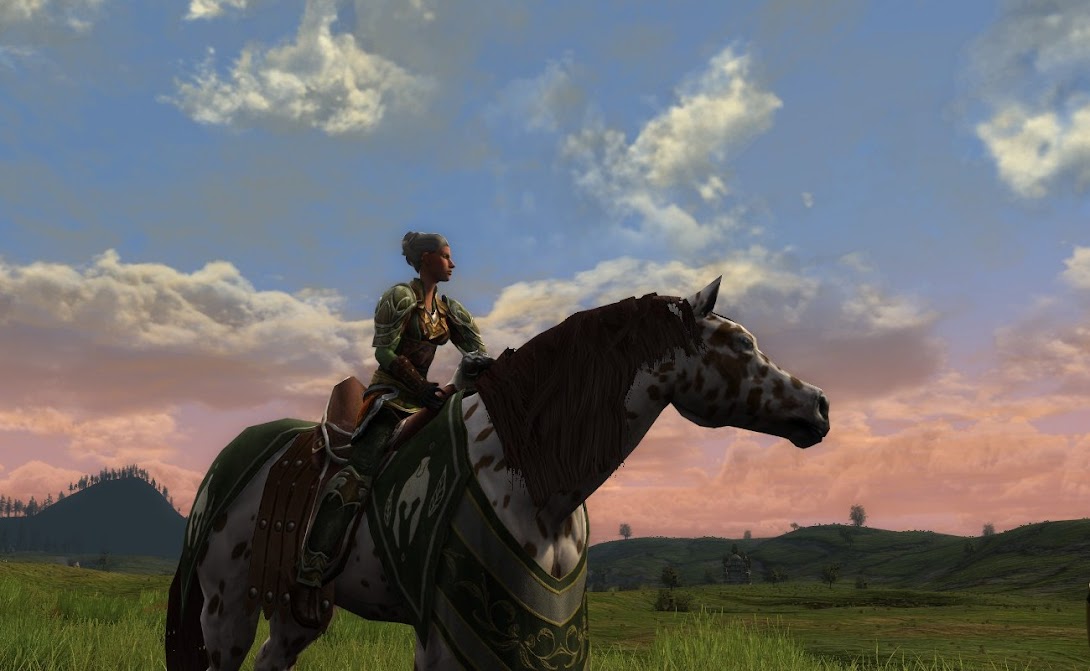 To be fair, this was before the uprising on the forums/boycott of warsteed colors was discussed. I had been saving my VIP 500 TP for awhile because I wanted to be able to color my steed. I was expecting the packs to be something like 395TP. Alas, they were 595 TP. It’s quite a bit for 4 colors you don’t get to choose (you may only want one of those colors, but too bad because you have to pay for 4 colors) as is thoroughly hashed on the forums and at Sig’s Warsteeds blog and Cosmetic LOTRO and other blogs as well.

However the day Rohan came out I was so excited for my horse and finally coloring it. I had gotten the Steed of the Burglar and Guardian a while ago in preparation. All that was required was one warsteed accessories dye pack and one warsteed skin color dye pack. When I saw the prices I was a bit crest fallen however I saw I had just enough to get both packs I needed, so I just went ahead and got them, grumbling as I went. 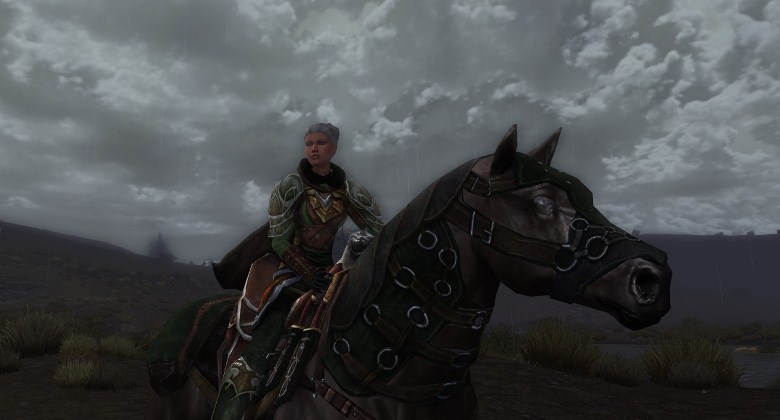 In the following days the cosmetics community came out quite thoroughly against the prices of the packs and most people seem to be boycotting them trying to get them to change. I hope my fellow fashionistas/fashionistos don’t get too upset with me

Anyway, I’ve made two horse outfits that I quite like so far. This is the battle-ready, fighting version (which I’ve posted pics of the warsteed outfit before, the new part is the coloring of Fram, my warsteed): 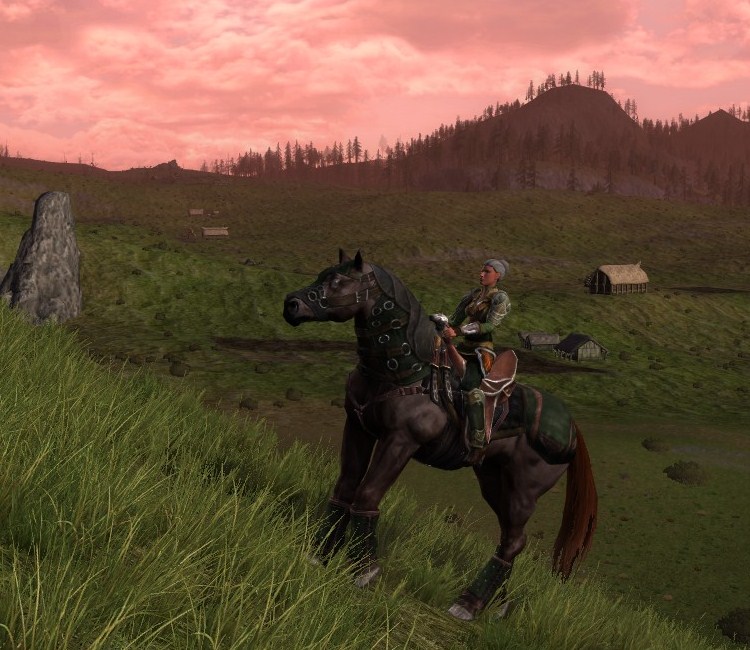 And then there’s the prettier, town version: 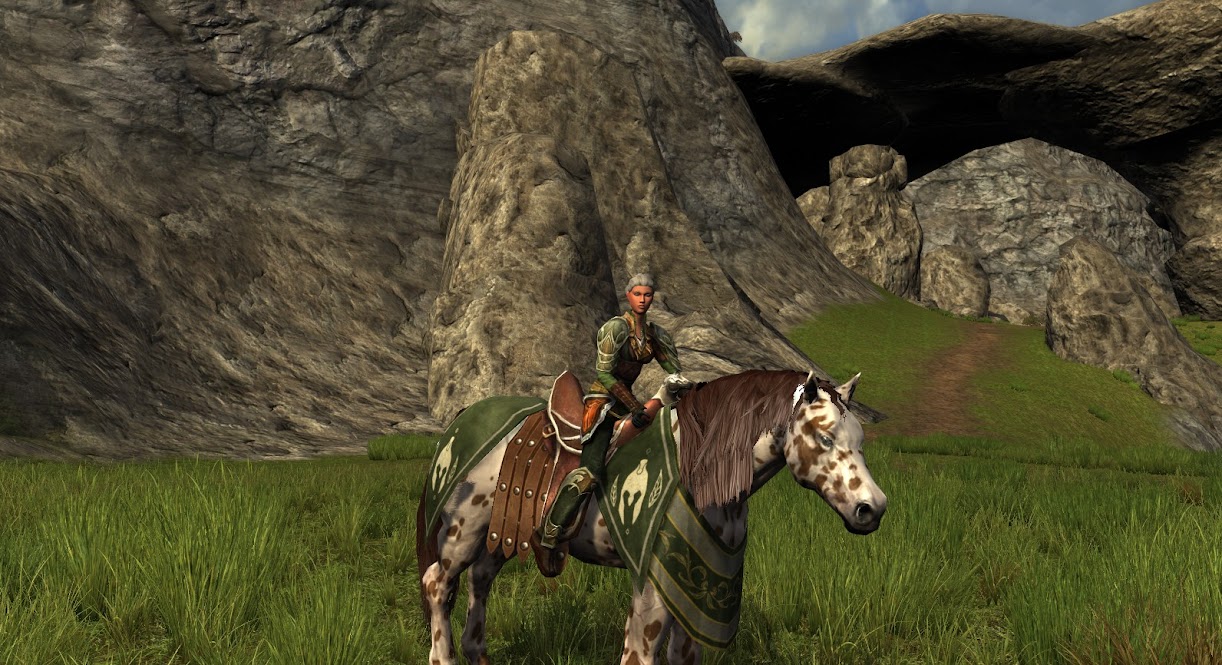 I’ve been grinding warbands daily attempting to get the Spotted Warsteed Hide and this morning on my first warband I finally got it! I was very excited.

In Rohan so far I’m only level 78. I was doing one level a day, but then got distracted by real life yesterday and didn’t play at all.

I’ve also been testing out the alpha of a new survival zombie MMO called The War Z. Nav is really into it and hasn’t even logged into LOTRO since Rohan came out! I tried playing a bit of War Z the other day after I got it finally installed. I’d include pictures but we aren’t allowed to post videos or screenshots I don’t think but nothing has been said about talking about it. Unfortunately so far you can’t join the same server as friends (you just join a random server, however you characters are able to be loaded into any of the servers unlike LOTRO) so I had to play by myself. It was dark when I loaded in. I couldn’t see much but some flashlights in the distance. You spawn in with a flashlight and assorted granola bars and bottles of water. I crept around through the grass keeping an eye out for any movement. There’s meters in the upper right hand corner telling you how easy to see and hear you are.

After awhile another person approached me, shining their flashlight in my eyes. I know I shouldn’t trust anyone, because PvP is allowed in this game. You can choose to be a friendly hero and help everyone out, or you can be the villain and slaughter both zombies and survivors alike…. usually for the phat lootz! I backed away slowly and shone my flashlight at them too, hoping they would go away. No such luck! They came at me trying to kill me with their flashlight! I swung back and managed to kill them first, taking their waterbottle. I continued down the road I was on until I saw some zombies shuffling ahead. I promptly got way too scared, whined to Nav about how scary the game was and quit.

I think once you can play with friends I won’t be as much of a wuss, but in the mean time… I’m a wuss.

When you find that perfect outfit and horse match up…